The Barracks Settlement (土, Soil, also called the Ghost Town by some fans, or the Shanty Village by the English soundtrack) is a deeper location that can be accessed from the Eastern Wilderness by going east and then north-west from Dark World's gate, or by talking to the Pirori found at one of the ends of the Docks B.

It is an openly-looping area that consists of identical shacks and Pirori wandering the streets. It is said that the Pirori are denizens of the Barracks Settlement that have spread out throughout many other locations in the dreamworld, such as the Sewers.

Although there are many small buildings, only two of them can be entered. One of them contains a strange orange creature known as the Seahorse, while the other one in the northern section of the map contains a path that runs between several houses, similar to the ones found in the main section of this map, with windows that have been replaced with monocular Isee. This path leads to a one-way door to Mural World. By talking to a certain Pirori who is randomly decided each dream, the player is teleported to FC World B, which leads to the Buyo Buyo effect. 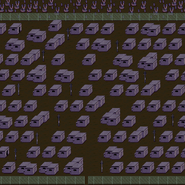 The Seahorse and Buyo Buyo in version 0.09

The Barracks Settlement in YUMENIKKI –DREAM DIARY–, featuring a drawing of Wrapi on the wall
Español
Community content is available under CC-BY-SA unless otherwise noted.
Advertisement