Block World (ぼうしとマフラー, Hat and Scarf) is one of the 12 original locations accessible directly from the Nexus.

It is an openly-looping world filled with many violet, indigo and white geometric blocks. The blocks are seen from an isometric perspective, making the world tricky to navigate with Madotsuki's orthogonal movement, like the Checkered Tile Path.

The Aztec Rave Monkey can be seen in the scrolling parallax background, similarly to Forest World before it.

While most of the world is no short of a wasteland of many different cubes and other structures, the Hat and Scarf effect is found here, by interacting with the hat and scarf on the floor near the center of the map in the middle of one of the blocks. Mafurako is also found here, off to the side. She can teleport Madotsuki to the door to the main map of the White Desert when interacted with. The men's restroom can also be found here, which can be used. There is also a bed that Madotsuki can use to reach Underground World.

The world was added to YUMENIKKI –DREAM DIARY– in its version 2.0 release on May 28, 2018. It is once again one of the original locations, although its structure has been altered. 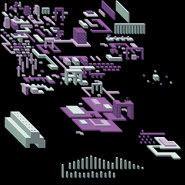 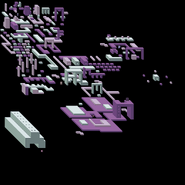 The Guillotine in version 0.06.