The Nexus
The Footprint Path A

Eyeball World (目玉腕, Medamaude) is one of the 12 original locations accessible directly from the Nexus.

It is a large, openly-looping and disturbing place - filled with lots of violent and gory imagery. There are eyeballs and severed heads strewn all about, disembodied legs hop across the floor and twitching arms that grasp the air. The music also features an unsettling synth over strange sound effects.

The scrolling background is one of the many examples of Mesoamerican (likely Paracas) imagery in the game.

The Medamaude effect is received here, by interacting with the Medamaude - an arm with an eye on its palm. The eyeballs on the floor can be stabbed with the Knife effect. The irises turn green and they bleed, and this is undone when the Knife is put away. This can be used to mark certain locations to avoid getting lost. Near the center of the map is a head with a gaping jaw that sends the player to the Footprint Path A when entered.

In addition to the plucked-out eyeballs, there are 'living' eyeballs and lips that can be seen, making up faces on the floor. Interacting with the lips makes a kissing noise. The eyes move vertically when the Knife is held. The various body parts are NPCs, and as such they scream when stabbed and have the possibility of dropping yen. The white and indigo severed heads are decorative characters known as Pier Monsters. 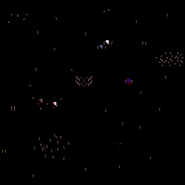 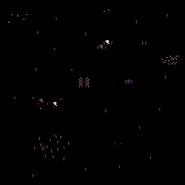 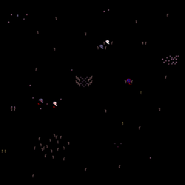