The green one will stare at Madotsuki upon leaving the Infinite Road and is not effected by the stoplight.

The Floyag (or Uterus-Monsters) are NPC characters that reside in The Infinite Road. They seem to be at a distance from the road.

There are six variants of Floyag, each shaped like a uterus, with eyes and what seems to be a mouth or third eye. They are also strikingly similar to iris flowers.

The first is tall, pink, and has red facial features.

The second is short, purple, and with pink and red features.

The third is as tall as the first, but duller, with black and pink eyes, a wider, multi-colored mouth, and a fourth feature in the mid-section. The bottom also seems slightly wider.

The fourth is short as well, but wider and red, with pink and purple eyes, and a red and pink mouth.

The fifth is tall, fat, and dull purple, with features similar to the third.

The sixth is only encountered before exiting. It's short and dark green, with blue and red features. When Madotsuki exits the road, its eyes focus on her.

Other than the shifting eyes of the last Floyag, they cannot be interacted with. 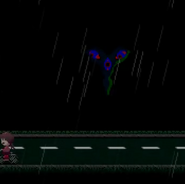 The fact that they are portrayed as monsters and they appear like a uterus could imply that Madotsuki has some sort of fear towards them. This could connect to other theories, as it is one of the many examples of body imagery in the game.