Forest World (かえる, Frog) is one of the twelve original locations accessible directly from the Nexus. It is an openly-looping forested area filled with coniferous trees; some form dense clumps and others stand alone.


The music consists of bells playing at varying pitches, giving the world a suspenseful and dreadful feel. The Aztec Rave Monkey can be seen in the scrolling parallax background, one of the many appearances of it in the game.

Being one of two doors directly north in the Nexus (along with Number World), Forest World is one of the first worlds accessed by many when they start playing the game. Like most of the original locations, it does not have a static floor and a lot of the features of the area are spread out, seemingly randomly, making it somewhat confusing to traverse.

A frog can be found here. It is one of two in the game that can give the Frog effect, the other one is found in the Dense Woods. Numerous decorative NPCs known as Frog Characters are found throughout the forest. Interacting with them causes them to appear above Madotsuki while floating around, although they disappear when the player goes to the Face Carpet Plaza, which can be reached by walking through the green pillars to the northeast of the door. 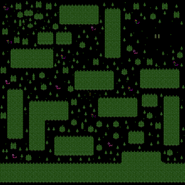 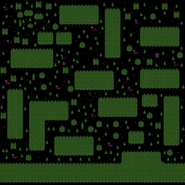 Forest World in versions 0.04 and 0.06, featuring a gate directly to Hell

The gate to the Face Carpet Plaza

Its appearance in the manga