The Nexus
The Mall

Graffiti World (自転車, Bicycle, also known as Musical Tile World by some fans) is one of the 12 original locations accessible directly from the Nexus.

It is a large, openly-looping world with few solid obstacles, but the floor is covered with colorful tiles that look like graffiti artwork. Each of the different types of tile make a unique noise when stepped on. Together, the tiles make up a huge floor pattern, resembling a strange smiling monkey and a seemingly worried face, with an appendage similar to the lure of an anglerfish.

The background hum that plays here is the same as the one in Hell and Mini Hell.

Map of the Graffiti World 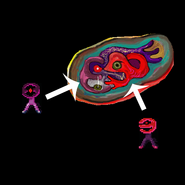 A possible connection between E-Man and O-Man.