Hell (赤, Red), also known as the Red Maze by some fans, is the name given to one of the largest areas in the game. It is a red maze featuring droning music (the same as Graffiti World) that is used as a gateway to other important areas, such as the Dense Woods B and the Docks B.

It is one of the most significant deeper locations in the dream world. Many routes from the Nexus will eventually lead here, allowing for many connections between remote areas. There are even some locations that are only reachable by finding its one entrance through this maze.

Entry to Hell is almost always achieved by locating one of the strange geometric NPCs that can be found in various 'dead end' passages deep inside certain Nexus locations. Some Toriningen may also send Madotsuki into isolated spots between pathways here, trapping the player.

Besides the many interesting characters here, there are other important aspects of the area. Near the center of the map, there is a dead end containing a lone Vending Machine that dispenses health drinks at 130 yen each. There is also a bright red Henkei Shita that has a 1/256 chance of taking the player to the The Footprint Path A when stabbed with the Knife effect. Not too far away from it is a staircase leading to the Docks B, and a gate that goes to the Dense Woods B.

The navigational difficulties created by the intricacy of the maze are compounded by a number of lunatic Toriningen wandering the narrow passages. Many of the paths appear similar in shape to those elsewhere in the maze, which can be disorienting - even with the benefit of a map.

A similar area, known as Mini Hell can be found in the Bed Room of Number World. 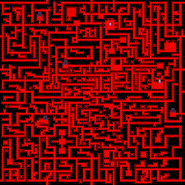 Hell in version 0.04, the left half of the full map found in later versions.

Hell in version 0.06, using the same kind of gate for each of the connections to other maps.

The Mirror that provided the Fat effect in versions before 0.10.

Hell in the manga.
Español
Community content is available under CC-BY-SA unless otherwise noted.
Advertisement