The Isee are groups of eyes that are seen as decorative characters, found in the second building of the Barracks Settlement and the dark section of the Dense Woods. Similar eyes appear in Eyeball World on the ground, but they can be interacted with and do not follow the player with their pupils. As they are background characters, they do not react to any effects either.

Eyes and varying body imagery in general are a common theme in Yume Nikki (especially in certain locations such as Eyeball World and the White Desert), which can lead the player to believe that Madotsuki herself often feels as though she is being watched by someone or something.

Some of these eyes are strabismic, meaning that they are not both able to fixate as one thing (such as those of Masada and the closet when Uboa appears), which has lead to theories that Madotsuki has this condition, which is the reason why she never opens her eyes.

In the Barracks Settlement

In the Dense Woods after using the Lamp to see 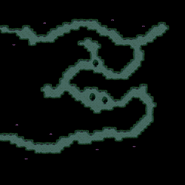 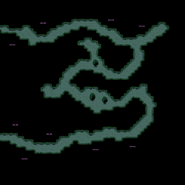 From v0.08 onward.
Community content is available under CC-BY-SA unless otherwise noted.
Advertisement