Crick in the Neck
NASU
The KALIMBA TV Channel
The Ending

The Nexus
The Staircase of Hands (Random)

Madotsuki's Room (現実の部屋, Genjitsu no heya, Real Room, ベランダ, Beranda, Veranda) is where the player starts (and ends) the game. This room and its balcony are the only locations Madotsuki can access outside her dreams.

Although Madotsuki can go out onto the balcony, attempting to leave the room by the door results in her simply shaking her head. This may be either due to her being a hikikomori, or because Madotsuki is physically unable to open it.

The balcony background changes depending on the time of day. It is a place of limited functionality until a later point in the game, and its dream world representation simply serves as a spawn point for the dream world.

In the manga, her room is the same and has the same role as the game. However, the manga dwells on a theory that she cannot leave the room because someone locked her in.

Her desk is where she writes in the titular dream diary to save the game. She also has a television that receives no channels but can be used to play NASU by interacting with the Famicom console.

The bed is the most important object in the room. When Madotsuki climbs into bed, there is a three second countdown in the top left corner of the screen. When it hits zero, the screen blurs out and Madotsuki starts to dream.

When Madotsuki falls asleep, she finds herself on the dream representation of her balcony (夢ベランダ, Dream Veranda). The bedroom (夢の部屋, Dream Room) is identical to the real one except for a couple of subtle differences - the Famicom is gone and the balcony backgrounds become slightly more surreal.

When switched on, the TV no longer displays the test card. Instead, either a large eye peering into the room or the KALIMBA TV Channel event will be shown, the latter being a 1/8 chance.

Instead of writing in her diary, sitting at the desk and pressing the "Z" button (interact) will let Madotsuki scoot the chair around her bedroom. She can ride the chair almost anywhere within the dream world (albeit very slowly), but will not be able to get off it until she returns it to her desk. Sitting on the chair and equipping an effect can result in a glitch that increases Madotsuki's speed.

Entering the dream bed does not cause her to fall asleep. Like all other beds, there is a 1/5 chance that it will transport her to the Staircase of Hands. The chance of this is determined when Madotsuki falls asleep, as one bed in the dream world is randomly selected to teleport her.

Most importantly, Madotsuki can leave the dream bedroom via the door. This leads her to the Nexus and every subsequent location within the dream world. 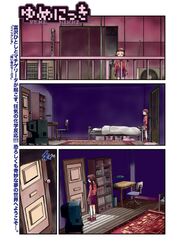 Madotsuki's room and balcony as they appear in the manga. 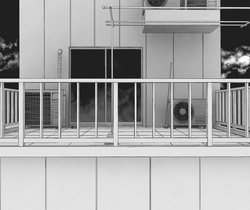