The Neon World is a one of the 12 original locations accessible directly from the Nexus.

It is a large, labyrinthine world that is composed of a series of small, brighty-colored rooms and wide open spaces. It is easy to get lost in the looping map where you can lose your sense of position.
Unlike other worlds that are sparsely populated, colorful neon-like NPCs (including many Neon Statues in version 0.09) are abundant here, a far cry from the lonely atmosphere created by other locations. The soundtrack has a faster tempo than other places, and the flashing floor tiles make sounds when walked over, making Neon World one of the noisier dream worlds, similarly to Graffiti World.

Assuming Madotsuki is supposed to be Japanese like her creator KIKIYAMA, the world is probably a representation of Madotsuki's memory of one of Japan's bustling neon-lit streets, such as those the Shinjuku area of Tokyo is famous for. 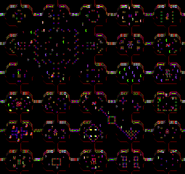 The door to the Neon Tile Path. 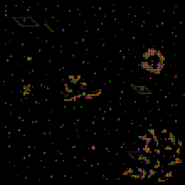 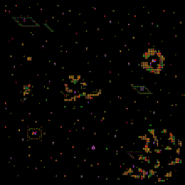 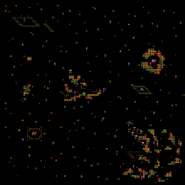 A screenshot of an older version.
Add a photo to this gallery
Retrieved from "https://yumenikki.fandom.com/wiki/Neon_World?oldid=16841"
Community content is available under CC-BY-SA unless otherwise noted.