Standard reaction to the Knife effect.
The Seahorse is a decorative character that resides inside one of the houses in the lower portion of the Barracks Settlement.

This creature is an orange mass with large eyes that vaguely resembles the face of a seahorse, hence its fan-given name.

The Seahorse displays no interaction to anything, though stabbing it with the Knife effect will cause blood to spray. In 0.08, it had a purple appearance instead. 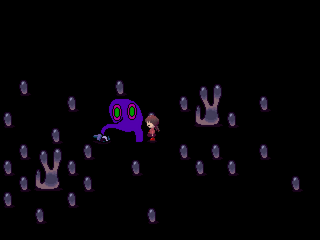