Displays standard reactions to the Cat, Stoplight and Knife effects, although backs away.
Sentimental Komuro Michael Sakamoto Dada-sensei (センチメンタル小室マイケル坂本ダダ先生, or simply Masada, or Seccom Masada) is a character found in Madotsuki's dreams. He is found by sleeping in one of the five beds present in the dream world, going down the Staircase of Hands, walking past the elevator, and using either the Umbrella or Yuki-onna effect to extinguish the fire and gain access to Underground World's storage room.

Masada is a humanoid NPC who appears to be wearing a solid black suit or jumpsuit. He has pale skin and medium-length black hair, and his eyes point in two different directions (from a front view, his left eye is pointing up, and his right eye is pointing down). His eyes are the only facial feature drawn on his character sprite.

He is found in a monochromatic spaceship, and is apparently the pilot, as there are no other characters in the area. He initially stands facing the middle of a large organ. He slowly turns in all four directions randomly. When Madotsuki interacts with him, he makes a trilling, robotic noise, the same one as one of the Neon Creatures. When interacting with him during the spaceship crash event, he makes a higher-pitched version of the same sound; also, he spins around much faster, which implies that he is panicking. When the ship crashes on Mars, his 'voice' is much more low-pitched, possibly signifying that he is upset by the ordeal.

When the Knife is equipped, he backs away from Madotsuki. This can be used, along with his standard reaction to the Cat effect, to play the piano key that he is otherwise standing in front of. This key is slightly out of tune compared to the rest. The background in the Spaceship also draws attention to Madotsuki when using the Cat effect.

As for most characters of Yume Nikki, the name of the character was created by fans. "Sekomu/Seccom Masada-sensei" (セコムマサダ先生) is a shortened mash-up of his full given name,
"Sentimental Komuro Michael Sakamoto Dada-sensei"

"Seccom" is a result of an English-language simplification of "Sekomu."

Masada in the game

Masada during the spaceship crash 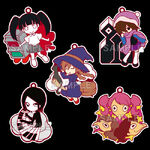 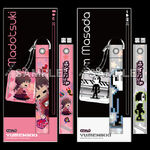 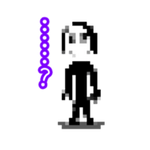 Masada as he appears in the manga.

Illustration from the light novel.