Shield-Folk World (猫耳, Cat Ear) is one of the 12 original locations accessible directly from the Nexus. This world is named after the Shield Folk that inhabit it, fluorescent non-NPC characters that cannot be interacted with in any way. They can be seen standing alone or in groups around the area and can act as landmarks. The floor is also dotted with strange moving lights that make sounds when stepped on, similar to the tiles in Graffiti World.

There is a parallax background that looks like some sort of Mesoamerican creature, similar to the Aztec Rave Monkey in the backgrounds of Graffiti World and Block World.

The music consists of what sounds like a xylophone being played, creating a sense of wonder as the player explores the world.

The Cat is received here by interacting with Nekoin who can be found near a group of red-faced Shield Folk. Near the center of the map, surrounded by a few animated tiles, there is a black gate that leads the player to the Static Maze that leads to the FC House. Other than that, the world itself consists of many lone Shield-Folk and more arrangements of tiles. 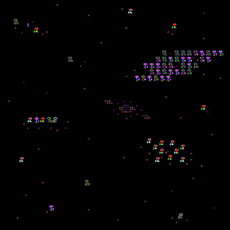 Map of the Shield Folk World 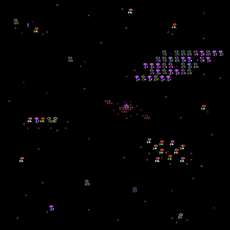