Dense Woods B (The Road)

The Cat causes him to twitch.

He is found after traveling on the Infinite Road of the Dense Woods B surrounded by traffic cones. Interacting with him gives the player the Stoplight effect. It could symbolize a traffic incident due to reckless driving.

Using the Cat effect near him causes him to twitch. Other than that, he doesn't react to anything in particular.

One of the more popular theories about the game is that Madotsuki has been in some kind of car accident, and Shitai-san could represent this by showing her past. Something to note is that a Jellyfish appears not too far away from him just like they appear in the ending to the game. Other things that support this theme is Monoko's event, Takofuusen, and the Severed Heads, not to mention the many odd reactions characters have to the Stoplight effect, such as the Buyo Buyo and Wheelies.

The corpse of Shitai-san in the Dense Woods B 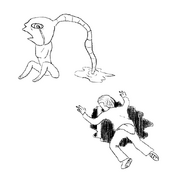 Its appearance in YUMENIKKI –DREAM_DIARY–
Español
Community content is available under CC-BY-SA unless otherwise noted.
Advertisement