None
Takofuusen (モノ飛行, Flying Mono[chrome] [Thing]) is a random event that takes place in the White Desert A, and is also a character by the same name. It was added in version 0.09.

Takofuusen has a 1 in 3600 chance of appearing, which is rolled approximately twice every second (once every half second). This translates to an average wait of thirty minutes between appearances, so there's a good chance of seeing it once or twice while exploring the main area (it does not appear in any of the tunnels).

Unlike Uboa, there is no way to interact with Takofuusen; it merely floats across your screen accompanied by a drum beat, similar to the sound that the Fisherman makes when interacted with.

Takofuusen resembles a large, flying, monochrome creature with a balloon-like body and two legs or arms that stick out at the bottom. Its body appears puffed up near the middle, as if swollen or muscular. Its two eyes squint in a similar way to Roary Straw, making its expression rather merry.

Takofuusen is highly regarded by fans as one of the strangest characters in the game not only due to its appearance, but also the manner in which it is seen by the player. As a result, there are interpretations of what it could represent, if anything at all. As it could be seen as a deformed child, some believe it to be an unborn sibling of Madotsuki, which could be related to the Severed Heads also found in the White Desert, which are often seen as her parents. As there are many scenes in the game related to traffic accidents (for example, Shitai-san, Mars-san and Monoko), it could have died in such an incident, and its presence could indicate that Madotsuki still thinks about this frequently, causing her grief.

Another theory is that Takofuusen itself is Masada's Spaceship, with its eyes being windows, or it could possibly be one of the UFOs searching for Madotsuki and Masada on Mars. 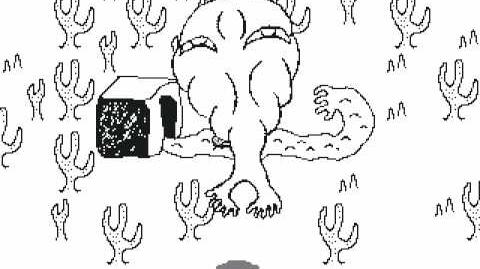 Yume Nikki - Strange thing in the white desert
A video of Takofuusen.

The picture of Takofuusen, found in the game's files.