The Footprint Path (足あと, Footsteps) is a small, dark passageway that connects Eyeball World to Hell.

The Footprint Path is a long trail of footprints on a black, seemingly liquid floor. The path is surrounded by non-NPC monsters, but Madotsuki can only walk on the existing footprints.
In the first section, there are a series of strange characters known as Henkei Shita sitting by the road, each of a different color set. One of these creatures has an identical counterpart in Hell. They are a source of theoretical speculation.

In this section, a different group of creatures known as Goppa can be seen. Like before, this strange group of monsters look alike but have different color schemes.
Unlike those characters, these ones are interactive, as they will react violently by opening their mouth and spurting a tiny bit of blood when the player pushes a nearby button. This button might possibly be a body part of the monsters as they respond whenever these are pushed, the corresponding coloration indicates that it's some kind of nerve which triggers the creature's reaction.

Map of the Footprint Path 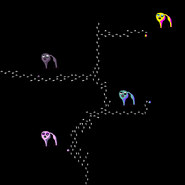 Footprint Path B in version 0.06
Español
Community content is available under CC-BY-SA unless otherwise noted.
Advertisement