Mall BGM
 Mall Rooms BGMFlute Room BGMMall Rooftop BGMThe Witch's Flight BGM
The Mall (デパート, Department Store) is a popular name by fans for a moderately large area found by going through the elevator in Graffiti World. It is a black-floored, purple-walled complex full of people that deform slightly and walk away from the player when interacted with. The location's music is very eerie and atmospheric, giving the location a slight creepiness.

The Mall's layout is quite strange. It has several pathways, rather like a maze, with walls facing diagonally, similar to the Checkered Tile Path. There is a second floor, but what is on it changes depending on how you enter it.

When the player first enters the Mall, they are greeted with a stairway with an escalator leading to the main floor with the Mall Shoppers and the entrances to the different rooms listed below, and another one. The BGM here is the same one as Shield-Folk World, but set at 50% speed. There is a 1/4 chance that there will be a traffic cone blocking the second escalator that leads to another small room leading to the rooftop, where the Witch's Flight event can be accessed. However, if the player arrived from Underground World, then the event will always be accessiable. The main level also contains another escalator going up that leads to a room with an entrance to the Frog Path section of the Dense Woods B, which leads to the Teleport Maze. On the other side of the 'outcropping' where the escalator is found there exists a small cavity in the wall that the player can walk behind, which can lead to several visual glitches of effects are used, such as midget.

One room, located near the bottom right of the map, is a small room with a chair that can be sat on and a poster on the wall. A large pool of red, bubbly liquid is found on the right side. It is populated only by a small pillar with limbs and eyes, named Tokuto-kun.

When it is interacted with, it tips over, spilling an endless stream of red liquid onto the ground from of a cavity in its head. It remains motionless after interaction, so it is possible to be stuck in the room if the interaction occurred at the doorway.

Another room, located in the bottom left of the map, houses a harmless, lunatic Toriningen sitting behind a counter and E-Man relaxing on a sofa. Interacting with the Toriningen will cause the color of your menu to change. E-Man frowns whenever the Cat effect is used (similarly to the Train Passengers) and even sneezes if you stay long enough inside the room. The BGM in this room is the title screen theme at 50% speed. 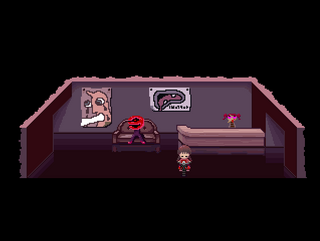 Also known as the Flute Room by some due to the Flute effect being located here. To obtain it, the player must enter the room in the bottom left in the map (the room where the harmless lunatic Toriningen and E-Man are found), then go to through the doorway on the left. The Flute is found on the ground next to O-Man, who sits on a couch and plays music. Killing him with the Knife effect will stop the music abruptly, and using the Stoplight also stops it.

There are some illustrations on the rooms' walls, containing scenes of odd imagery. The gallery below consists of fanmade enlargements of the art.

Poster to the right of E-Man

Poster to the left of E-Man 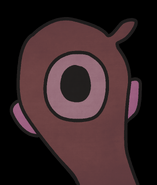 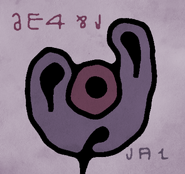 Going through the second escalator in the main stairways (1/4 chance) leads the player to a room that leads to the Mall Rooftop. It is a small area with a backgrounds containing mountains and a clear sky, with exhilarating music. There is a black cat in this area that can appear either on top of the entrance that the player came from or on some boxes next to it, with there being a 1/2 chance of either occurring. There is also a 1/64 chance (the same as the Uboa event, curiously) of the cat appearing on the main level, allowing the player to be able to interact with it. If the player has the Witch effect, they can use it and walk off the roof to activate the Witch's Flight event. The event and the location share the same music, with it being set to 70% while on the roof itself.

The entrance to the Mall's Rooftop.

The background used for the area. 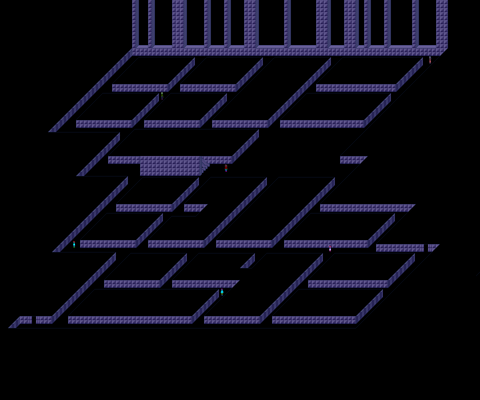 This map is an overhead of the main area, with the two escalators leading to the first stairway and the stairway leading to the Dense Woods B. The door on the bottom left leads to E-Man's room and the Flute effect, and the door near the middle right leads to Tokuto-kun's room. 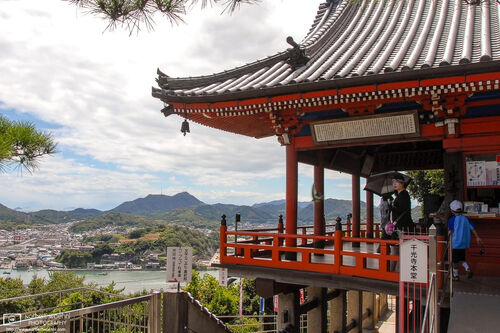