扉部屋.xyz (Panorama)
The Nexus (also called the Door Room) is the first room of the dream world, serving as the central hub from which all other locations can be eventually reached. The room is one of the most iconic locations in Yume Nikki, with its characteristic colorful doors and concentric Paracas-inspired floor design.

It is a relatively small room with thirteen doors arranged in a circle around the centre. The top door is set slightly farther from the centre than the others, and leads back to Madotsuki's Dream Room.

The other 12 respectively lead into the top-level worlds known as the original locations.

Clockwise from the top, they are:

There are many locations that cannot be reached directly from the Nexus, known as the deeper locations. They can only be reached by traveling through the original locations, with some locations requiring the player to traverse through many worlds before they arrive.

All of the original locations have doors and portals leading deeper into the dream world, so dead ends are rare to find in Yume Nikki. It is also notable that many locations are joined together by other worlds, so the 12 original locations are not completely separate. It is quite possible to return to the Nexus by a different door to the one you left from.

The Nexus is the only room where Madotsuki's effects can be dropped. This is done by equipping them and pressing 5. This removes the effect from your inventory, but it can be retrieved by interacting with the egg.

Each effect appears as a unique egg that is analogous to the effect it contains, for example the Medamaude egg has an eye on it, the Midget egg is small and the Neon egg strobes bright colors.

Wherever the eggs are placed, they will arrange themselves into their correct positions when Madotsuki leaves and re-enters the room. When all 24 effect eggs are in place, they make two full concentric circles around the centre. This produces a change in the real world, allowing the player to end the game.

Chart of the Nexus' doors 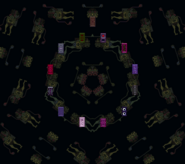 Full map of the Nexus

All effects dropped in The Nexus

The effects dropped in the Nexus in version 0.04

The Nexus as it initially appears in the manga 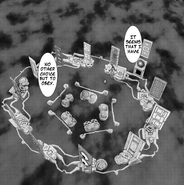 A ruined Nexus from the manga

A view of the worlds reached from the Nexus from the manga
Español
Community content is available under CC-BY-SA unless otherwise noted.
Advertisement