The Pink Sea (浅瀬, Shallow Water, also known as the Pastel Sea or Pastel Shoal by some fans) is an openly-looping deeper location of Madotsuki's many dream worlds.
The whole world is dominantly pink, characterised by several pale islands surrounded by a large expanse of shallow, pastel-colored water. It was added in version 0.07, although it lacked Poniko's House, and by extension, Uboa.

Interacting with the balloons will teleport Madotsuki in and out of the water. The pink balloon is connected to the blue balloon, and the green balloon is connected to the yellow balloon. Madotsuki's speed is halved while in the water, requiring the Frog or Bicycle effect to travel at normal speed. Poniko's house is situated here, on the southernmost island within a group of conical shapes. Two pink and purple structures, which slightly resemble Y-Chromosomes (and as a result the Ghostmen and the formations in the sea of the Witch's Island as well), can be seen on two tiny deserted islands.

A small house with a singular room located in the south of the Pink Sea. Inside is Poniko, an NPC that does not interact or give anything to Madotsuki upon interaction. The player can also turn off the room's lights, which changes the room's appearance.

There is a 1 in 64 chance (determined when you enter the house) that, upon switching off the room's light, the Uboa event will trigger. This will drastically change the room's appearance and replace Poniko with the character Uboa as a loud scream-esque sound plays instead of the normally happy music. Interacting with Uboa sends Madotsuki into Uboa's Trap.

Although it is ostensibly a large ocean, the world seems to be styled along the lines of a young girl's birthday party. The dominance of pink and pastel colors, the floating balloons and the conical structures on Poniko's island that resemble Japanese-style party poppers may indicate that this dream is based on Madotsuki's memory of a birthday party. This may be significant in interpreting the Uboa event and Poniko's relationship to Madotsuki.

Alternatively, it may also be another homage to the Mother series, since it resembles Queen Mary's Magicant from the original Mother game (also known as EarthBound Beginnings in English), and the exterior of Poniko's house resembles the buildings there as well as Queen Mary's castle. 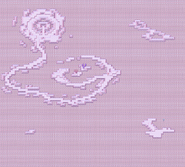 Map of the Pink Sea in version 0.07, only connected to the igloo in Snow World. 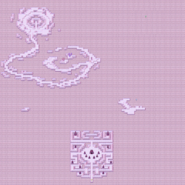 Map of the Pink Sea in the current version.

The Pink sea in the manga 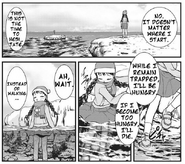 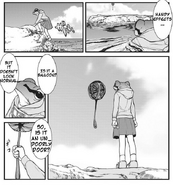 The teleporting balloons in the manga

The outside of Poniko's House in the manga 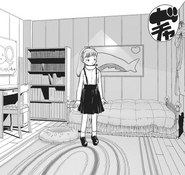