The Spaceship is a small area consisting of the interior of a futuristic spaceship, with white ovoid rooms and strange, post-modern furniture. Seccom Masada-sensei lives aboard by himself, playing his piano as he drifts through space.

Madotsuki appears on the Spaceship in the porthole vestibule after walking through the storage room in Underground World. After entering the main room, she can no longer return to Underground World as the door simply leads straight through to the access ramp.

Sleeping in the bed in the dormitory makes the lights dim. (Note: The lights do not dim in the Steam release due to a bug, but the event will still occur the same.) There is a 1/6 chance that Madotsuki will fall asleep. She will awaken to the sound of an emergency alarm and see the stars rush past the window rapidly as the spaceship descends. After 15 seconds, a cutscene of the ship crash landing on Mars will play, after which the access ramp will lower, allowing her to explore the surface of the planet. 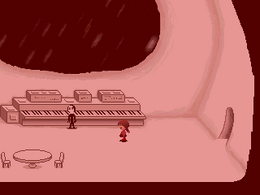 The Spaceship Crash event, with Masada panicking at his piano. 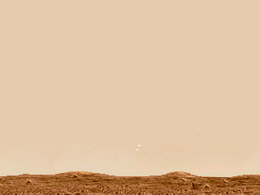 The small cutscene that plays during the event. 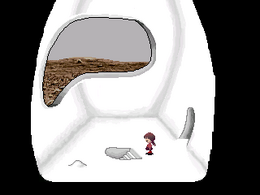 Mars is accessible after the event finishes.
Español Русский
Community content is available under CC-BY-SA unless otherwise noted.
Advertisement