• Trapping Madotsuki by teleporting her into enclosed areas.

• Changing the Menu's color scheme (the nice one in the Mall).

Shows standard reactions to the Cat and Stoplight effects.

Becomes 'lunatic' when stabbed with the Knife.
Toriningen (鳥人間, "Bird-humans") are a certain group of characters in Yume Nikki. They have long pointed snouts for noses that appear beak-like, hence their name.

There are three variations, each with a different hairstyle: twintails, ponytail, and bobbed hair, who each have a mostly identical face. The three types also have a different outfit on.

Normal Toriningen will not harass Madotsuki, but those in a 'lunatic' state (identifiable by their purple eyes and tongue lolling out of their mouths) will chase her, teleporting her to an enclosed space in an area that is usually different to the one she is currently visiting if they catch her.

The only way to escape from these areas is to use the Medamaude effect or to pinch your cheek to wake up. Stabbing a normal/sane Toriningen makes all other sane Toriningen go into the lunatic state (with the exception of the ones in the Wilderness) until Madotsuki is caught or wakes up. There is one particular odd lunatic Toriningen in The Mall behind a desk who is not aggressive, instead changing the color scheme of the player menu to a random preset when interacted with.

Lunatic Toriningen can be avoided by using the active function of the Triangle Kerchief effect, which renders Madotsuki invisible to them unless she interacts with them directly. They may also be immobilized using the Stoplight effect, which freezes them in place when the light is red.

Toriningen are unable to be killed. It is possible to stab them one or two extra times during the transformation into a lunatic state, but it will not do anything. They share this trait with Uboa, the only other character considered to be an "enemy" in the game, as they both teleport Madotsuki to a closed-off trap area.

The player character in NASU has a similar snout to the Toriningen. Toriningen can be portrayed as tengu imagery present in Yume Nikki. Even more, a Japanese mythological creature called the Baku (or "Dream Eater") is characterized by having a long snout, and may possibly be related to the appearances of these NPCs, although the Baku are meant to be tapir-like creatures.

Toriningen are spread diversely throughout numerous dream worlds, appearing in many different locations.

1-3. The three Toriningen here are having a party and are not capable of being made lunatic, due to the fact that Madotsuki is blocked from reaching them by vegetation.

Toriningen are unique among the many characters found in Yume Nikki in that they are one of the few who can be considered "enemies" in the game. It's possible that this status as a hostile enemy-like character came from something that happened to Madotsuki in the real world.

One common theory relating to the Toriningen is that they symbolize bullies in the real world. They often act as a group in order to hunt down Madotsuki. Even if just one passive Toriningen is harmed and a successful escape is made, other passive Toriningen around the dream world will turn hostile. They are also known to trap Madotsuki in isolated locations, which may relate to Closet Madotsuki, a duplicate Madotsuki who is found trapped inside of a closet. This could possibly show an instance in which Madotsuki was trapped or locked away in the real world as a result of being bullied. It should also be noted that in the Checkered Tile Path, where Closet Madotsuki is found, a hostile Toriningen can also be found. Similar closets also appear in Number World, where another Toriningen is, and throughout Guillotine World, which has many hostile Toriningen. The Toriningen are also shown to party without Madotsuki in the Wilderness, which could either be a form of social exclusion or show that Madotsuki yearns to make friends but feels unable to.

The Toriningen could also symbolize Madotsuki's views on other girls or women as well as beauty and appearance. The Toriningen are shown to have much neater clothing and hairstyles than Madotsuki, though they have squinted eyes, long tongues, and elongated snouts, which could be an exaggeration of makeup or applied beauty products. This could have possibly affected Madotsuki's view on her own appearance, leading to different effects such as the hair-related effects and body-related effects such as Fat, Midget, and Buyo Buyo. This also relates to the bullying theory discussed above, as she may have been insulted for her appearance, leading to these effects.

It should also be noted that their appearance is similar to the player character in NASU, one of the few points of visual stimulation that Madotsuki has in the real world. It's possible that their appearance in her dreams was influenced by her playing the game, as both the Toriningen and NASU resemble bird-like humanoids.

A sane Toriningen from the Official Manga 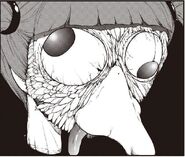 A lunatic Toriningen from the manga

A group of Toriningen from the manga 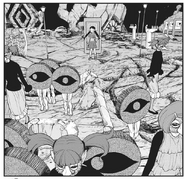 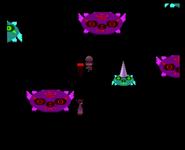 One of the Toriningen found in Hell.
Español
Community content is available under CC-BY-SA unless otherwise noted.
Advertisement