The game files of Yume Nikki contain some unused content, which are listed here. A lot of these are unused parts of the tilesets found in-game, extracted from RPG Maker itself.

Note: This article is very out of date. Until it is updated, please visit Yume Nikki's article on The Cutting Room Floor for current information and even more unused content.

A round, rose coloured pillow.

A sprite for the trash can with paper inside.

A reflection in Madotsuki's window.

Unused tile that resembles a streetlight

This gate was used in previous versions of the game.[1]

Within the game's files is a parallax background that, although it seems finished, is found nowhere in the game. When adding a party member (mentioned below), this background scrolls by in Neon World, although it is not symmetrical and therefore doesn't display properly.[2] 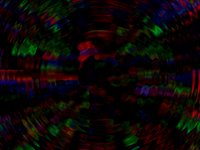 A Japanese Torii gate appears in the tileset.

Interacting with the flowers in the Flower Path (the place connecting the Sky Garden to Ghost World) calls a common event that is meant to play from a sound file named 'flower', but it cannot be played as the file doesn't exist.

In older versions of the game, the Fat effect was supposed to be retrieved from Hell, by interacting with a funhouse mirror. But later it was changed to the Docks. However, the sprites for the mirror are still in the game, and the mirror is in the Debug Room.

While the ship is not falling or grounded, and before the falling event is triggered, a map event is continuously triggered. This event has a 1 in 41 chance of calling a common event that is meant to play a nonexistent sound file named 'ポーン' in 1 of 4 different pitches.

On the tileset of Forest World, there is a design of a table with a cup. However, it goes unused.

On the tileset of Graffiti World and Forest World, there are also two unused confetti tiles.

There is an unused door graphic in the tileset of Mars-san's room. It fits perfectly on one of the walls, but it just isn't there. 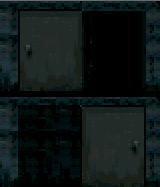 There are also graphics (and code in the unpatched version of the game) in the main tileset for stairs that would be used on the summit, suggesting that the Midget wasn't originally used to enter the underground area.

A huge part of FC World, known as FC World C by fans, is unreachable. There are also a few other things that go unused that are listed below.

An island with four statues exists in the files but goes unused.

These tree designs exist in the files, but are not used in the game.

For comparison, only this design is used to represent trees in FC World.

In the Sewers tileset, a tile resembling an eye goes unused.

In the charset folder, the file "イベント_006.xyz" contains an unused design. Some have speculated it to be the original exterior of the Spaceship during the crashing cutscene.

The design as it appears in the file.

In the files, there are unused sprites for the Buyo Buyo in a different art style. This could possibly mean that they were never meant to be in a FC World, but rather, one of the main ones. This was true in version 0.06, as they were housed in the Barracks Settlement, using these graphics.[3]

Unused sprites also exist for a train passenger and the Submarine Fish has a lighter and less detailed version of its design in the files.

The Kinoko-sans in the FC Basement have an unused variation with darker and lighter colors, but are otherwise the same. Despite being unused, they are found in the same charset file as the used version. The first mushroom in it remains the same. An error in the latest version of the game causes it to be used when the player uses the Cat effect.

The submarine fish in a different palette

Another party member can be added to your party, but this is not part of the gameplay itself. It is nameless and there are no sprites associated with it. Having it in your party causes several scripts in the game to change. The party member requirement prevents events that should be "called" from being triggered directly. This could have been used for testing.

In the old versions of the game that have been recovered, low res thumbnail images can be found depicting some unused content.

Notable things found in these files include:

Retrieved from "https://yumenikki.fandom.com/wiki/Unused_Content?oldid=17565"
Community content is available under CC-BY-SA unless otherwise noted.