The White Desert (モノ, Mono) is a deeper area reachable by interacting with Mafurako in Block World. It is populated by a large number of notable NPCs, including Monoko, Monoe, Takofuusen, and the Thing with the Quivering Jaw.

It is one of the largest areas in Yume Nikki, and for that reason it is divided into three main sections: White Desert A, White Desert B, and Uboa's Trap, with many subareas. Despite its size, it does not contain any effects, although it does have many notable events. The music is composed of a sneezing-like sound and a bell noise playing at certain intervals, further adding to the unsettling feel. It was added in version 0.07.

The desert's name is based off of its color - or rather, its lack thereof: everything in the White Desert is entirely black and white, save for striking bits of red found on certain maps. Various limb-like objects protrude out of the surface, some moving when interacted with effects, similarly to Eyeball World, in which animated hands and eyes are on the ground. There are also many cacti scattered all across the land, and various pathways. Everything also has a distinct cartoon-like art style that is also used for the Drawings in the Sewers event and, to an extent, Big Red.

The black gate in Block World makes the player come out of a smiling tooth's mouth, with two arms next to it. These arms display the standard reactions to the Stoplight effect, and move faster before being stabbed. The whole time the player is in this main map, there is a 1/3600 chance of the Takofuusen event occurring, which is rolled every half second. Near this entrance is the Eye Box, which, when stabbed, has a 1/30 chance of teleporting the player to a small dark area filled with Eye People; getting back is done the same way.

Monoko can be found in a tunnel that has a horizontal path go through, using the Stoplight effect will make her show her other appearance. Interacting with her in this state triggers her event.

Killing the Dave Spector near the circular path tunnel will allow the player to access two places from that tunnel: going to the west entrance leads you to a large, dark looping area with Monoe inside, interacting with her leads to a full screen event featuring an unsettling portrait of her. She disappears afterwards and goes to a random spot on the map. Going through the east entrance leads you to a path that has huge body parts coming out of the ground that can be stabbed, trees, a few buildings, and a small house at the end which triggers the Severed Heads in the Sky event.

After traveling past the groups of Floyag in the Dense Woods at least 5 times, the manhole leads to Roary Straw, a creature which has its appearance changed by how long you have been walking on the road. If you pass by them a total of ten times, it has a red and slightly more unsettling appearance. Climb up to the surface and you will be in a place that is surrounded by mountains with weird antennae-like objects and an entrance resembling a man's head. You can enter its right ear.

Entering the ear, you will be in a map with a single pathway. In the middle there is a huge monster which is known as the Brain Creature. Pressing and holding the up arrow key next to it will make the camera pan up so you can see its full appearance. If you keep walking along the path you will come out from a Buddha's left ear, and meet a giant monster called the Thing with the Quivering Jaw.

If you came from the FC Dungeon, you will arrive at a small location known as the Underground Lagoon, which has a moving shadow arm coming out of an eye and a few stubs coming out of the wall. Using the Cat effect will make them move up and down constantly, while using the Stoplight makes them stay up and down, alternating. In the far corner of the map lies a stairway that leads to the outside of the ring of mountains, which has nothing but a floating stair path and a tunnel near the entrance that has a path you can follow. Following the path will send you through a one way teleport to the White Desert A's tunnel near the southern corner of the map.

From outside of the mountains, you can see the red tentacle from Roary Straw, but can't see the entrance that looks like a head in the center. The outside portion of the White Desert B is potentially the most difficult location to reach without a walkthrough because it requires you to go through two different mazes: the Teleport Maze and the FC Dungeon (which is hard itself to navigate as it is dark, making the Lamp effect highly recommended).

This small, looping area can only be reached by interacting with Uboa in Poniko's House, and there is no way to get back. The background contains a large creature known as the Bloody Touching Monster, scrolling by, groping a few hills and spurting out blood. The player walks through a sort of white liquid that can be traversed through faster by using the Frog or Bicycle effects. Just below this liquid near the starting point of the map is Uboa itself, wearing a rather odd expression on its face. The only way to escape is by waking up or using the Medamaude effect. 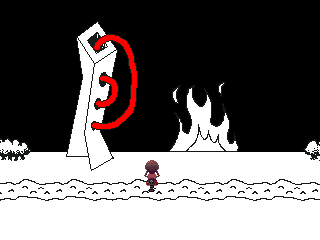 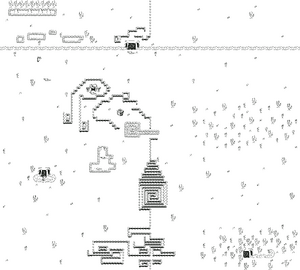 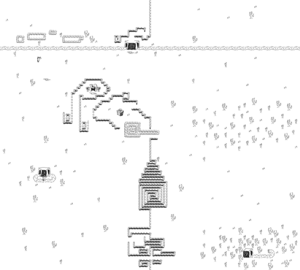 White Desert A in version 0.09 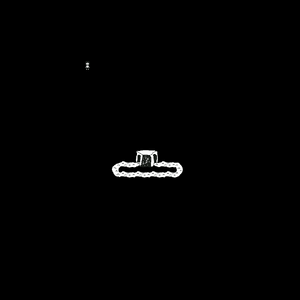 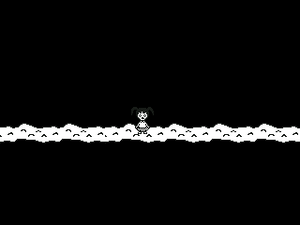 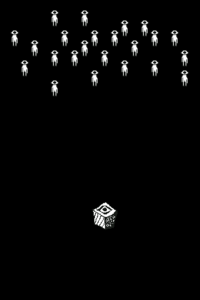 Inside the Eye Box 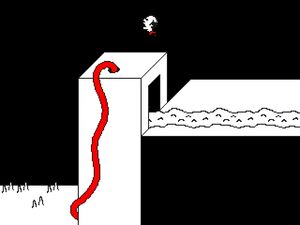 The Severed Heads in the Sky Event 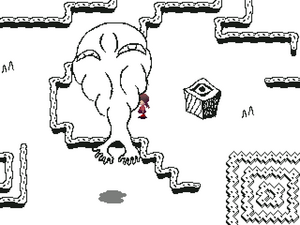 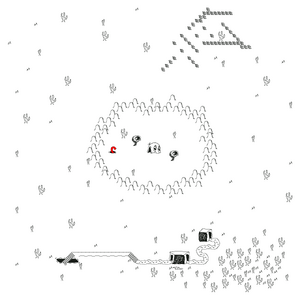 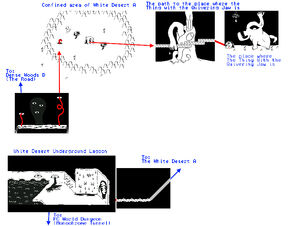 White Desert B (inside) and Underground Lagoon Map 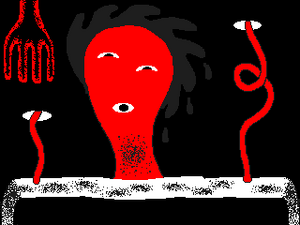 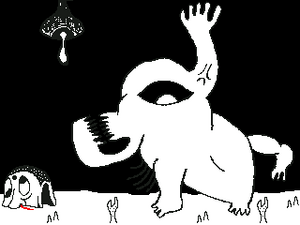 The Thing with the Quivering Jaw 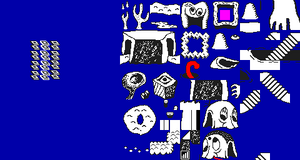 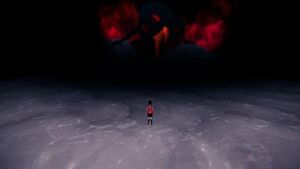 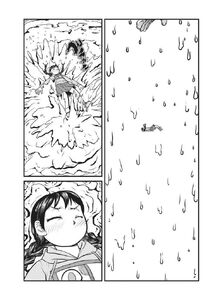 Uboa's Trap in the manga 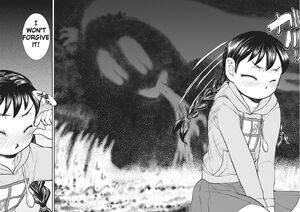