Windmill World (座敷洞, Zashiki Cave) is a small, looping area that can only be reached by being eaten by Big Red via the Sewers. It is the only world not accessible from the Nexus that has a static background, and there are not really many notable things here.

The Windmill World is quite small and has many windmills around. There are only two NPCs found in it, the Cube Guru and the Fisherman. Interacting with the Cube Guru will make its head spin around while interacting with the Fisherman will send you to the Docks A, without a way to get back. Near them, there are a couple of hedges shaped like buildings. One of these hedges has a door that leads to Block World, again without a way to get back. 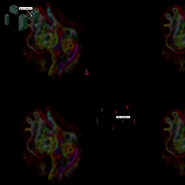 A map of the world.
Add a photo to this gallery
Retrieved from "https://yumenikki.fandom.com/wiki/Windmill_World?oldid=15514"
Community content is available under CC-BY-SA unless otherwise noted.